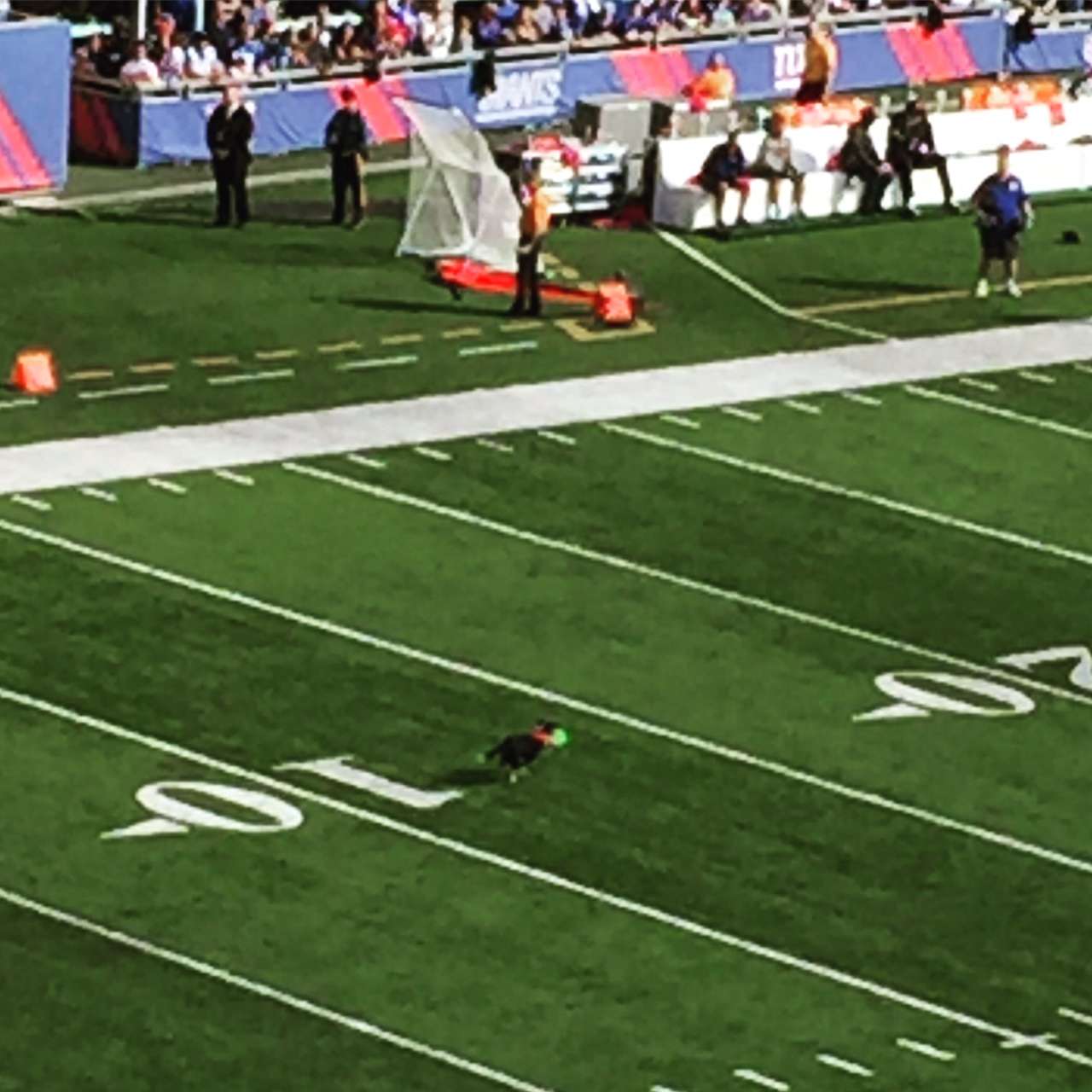 On Sunday, I went to the Ravens Giants game at the Meadowlands.  As a football lover in the core of my being, I didn’t realize it was also going to be such a spiritual experience.

About mid-way through the first half of the game, I heard the announcers tease us with the half-time show.  Flying dogs.

Yes, I want to see flying dogs.  I don’t care if I am hungry or have to pee.  They had me.

Three dogs performed during this show.  All the dogs were rescue dogs that have now become service dogs.  They chased frisbees catapulted from end zone to end zone— running at full speed and doing their best to perfectly time each catch.

The last dog– her name was Soulbaby.  Her energy filled the stadium.  She was pure soul love– the kind that we have as babies before our outside world changes us.  She lived for this.  I could feel her — as she ran.  Free joy.  She didn’t miss many of the frisbees, but when she did– she didn’t stop to berate herself. No, that moment had already passed and she was again in the present moment bringing her best to the now.

She was doing what she loved for the pure pleasure it gave her.  She didn’t stop to think what we thought of her or whether she was really good enough to be out there on such a big stage.  She just did it.  And this small dog (probably less than 20 lbs) had filled an entire stadium built for almost 100,000 bodies with her being.

How many times had I stopped myself from going big or taking a risk because I got tangled in the fear of being good enough?  Being perfect.  Wondering what others will think — if I am awesome or if I do mess it up.  Either feels scary when you choose the fear track instead of the love track.

I’ve even asked the question to myself “who do I think I am” doing …..(fill in the blank here).  I shrunk myself in those moments.  Forgetting that this energy superhighway is infinite, massive and will support all my dreams, attempts and missteps.

Today, go out and chase your frisbees– whatever those are.  Feel the pure joy it gives you.  Let go of your own judgement or whatever you may perceive in others.  And just fly.  Soulbaby style.